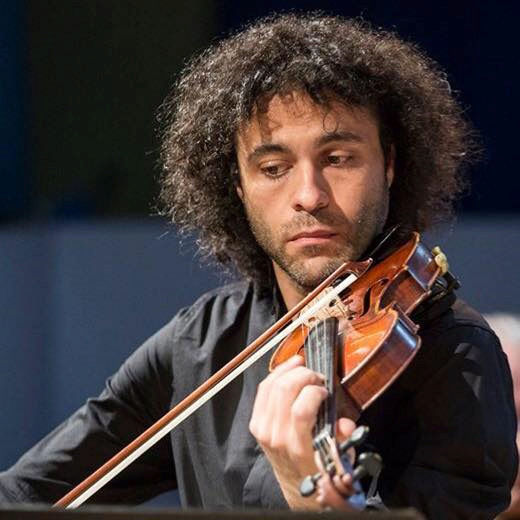 In 1995 he obtained a diploma in violin with the maximum mark (and a special note of merit) under the direction of Patrizio Scarponi from “F. Morlacchi” Conservatory of Perugia.

He then specialized in Rome with Antonio Salvatore and in Siena with Uto Ughi at The Chigiana Music Academy, where he won a scholarship. He attended a three year course of Concertmaster held by Master Giulio Franzetti at Fiesole School Of Music where he won a scholarship in 2001. As the founder member of the “Quintetto Scarponi” he has participated in the most important Italian concert seasons (Amici della Musica di Perugia, Amici della Musica di Pistoia, Società del Quartetto di Vicenza, il Coretto di Bari, Estate del Ceresio di Lugano) and has recorded with various recording studios (Nuovo Era, Ricordi, Bongiovanni). He has performed on radio (RAI, RSI) and played for important premiers.

He has played in numerous orchestras obtaining great success as a soloist in performing J.S. Bach, W.A. Mozart, M.Brunch,F. Mendelssohn and V. Bucchi. He collaborated as violin soloist with the following orchestras ,“Camerata del Titano”of the Republic of San Marino, the “Accademia Strumentale Umbra” orchestra of Perugia and with “I Filarmonici del Teatro Comunale di Bologna”.

Furthermore in April 2000 he won second prize (the first prize was not given) in the Violin Competition “Guido Rizzo” -Rome.
In June 2000 he was classified in first position in the audition for violin in the “Haydn” Symphony Orchestra of Bolzano and Trento.

In 2001 he was classified in first position in the competition for Violin Tutti held by the Orchestra of the Teatro del Maggio Musicale Fiorentino in which he was a permanent member of the First Violin section from 2001 to 2005 and with which he played under the direction of the greatest Masters on an international level.

(Z.Metha, C.Abbado, R.Muti, L.Mazel, S.Ozawa, G.Pretre, M.W.Chung ecc). He collaborates with various national orchestras amongst which the Filarmonica del Teatro alla Scala, and as Concertmaster with the Regional Veneto Orchestra “Filarmonia Veneta”, the Symphony Orchestra of San Marino and the Filarmonica del Teatro Comunale di Bologna, of which he is a founder and a member of the Board of Directors.

In 2007, after becoming a finalist in the competition for Concertmaster held by Teatro S. Carlo di Napoli, Teatro Massimo di Palermo and Teatro Lirico G. Verdi di Trieste he obtained the role of Assistant Concertmaster in the Orchestra of the Teatro del Maggio Musicale Fiorentino.

In 2004 he was unanimously voted first in the classification for the position of Assistant Concertmaster by the Teatro Comunale di Bologna where he has permanently held this role since 2005.

He frequently exhibits with different chamber groups in duo with Piano and as a soloist in recitals.

Since 2009 he has taught violin with the music school “Alfredo Impullitti” in Pianoro (BO), affiliated with the state Conservatory of Music “G. Frescobaldi” in Ferrara. Every year his students win important awards and first prizes in various national and international competitions.

Since 2019 he has been a professor at the Three Year Academic AFAM of violin at the Casa della Musica in Arezzo (Music School of Fiesole). In 2018 “Sinfonica Edizioni Musicali”published a collection of his arrangements of famous pieces written for the Violin Quartet.