The distinguished musician and pedagogue continued his visit in Malta with an open masterclass session at the Hamrun school, organised thanks to the work of the European Foundation for Support of Culture. 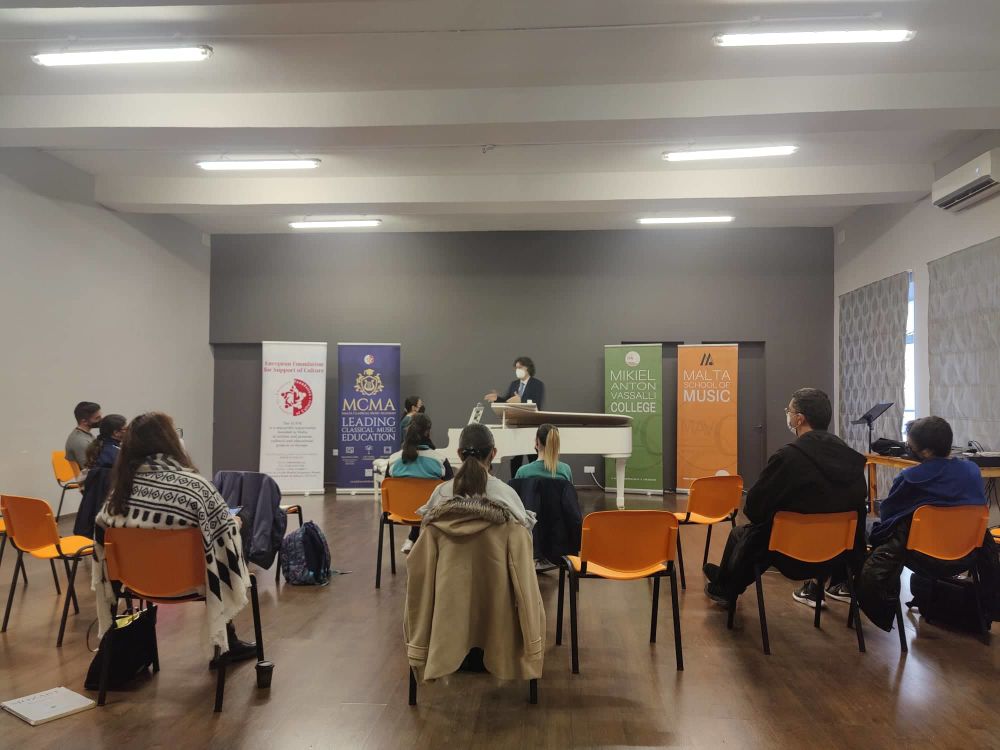 On Monday 14th March, the Malta School of Music at Mikiel Anton Vassalli College in Hamrun played host to the famed Italian pianist Giuliano Mazzoccante, who led a lengthy open masterclass where he worked with a number of different students from the School's ranks.

Organised by the European Foundation for Support of Culture (EUFSC) in partnership with the Malta School of Music itself, this masterclass promised to give the School's young pianists a taste of tutelage under one of the most widely-renowned piano professors of our time.

Mazzoccante is the winner of various national and international competitions, including the “M. Clementi” in Florence, “Agorà 80″ in Rome, “F. Liszt” in Lucca, and “Città di Stresa”. In 1997, he won second prize at the ‘T. I. M. ” – International Music Tournament; in 1998, he was awarded the prestigious “Prix Venice”; in 1999 he won second prize at the international competition “Ecomusic” of Monopoli (BA); in 2002 was the winner of the 40th International Piano Competition “Arcangelo Speranza” in Taranto, and in October 2009 he was awarded in the “4th International Tbilisi Piano Competition” in Georgia (WFIMC).

He is regularly invited to hold concerts and masterclasses at international festivals such as “ClaviCologne Festival” in Germany, the “Malta International Music Festival” and the “International Piano Festival & Competition” in Italy, and often serves on juries for national and international piano competitions, including the ”Citta di San Giovanni Teatino”, which he founded and directs to this day.

He has appeared as a soloist with orchestras including the Camerata Baltica, Lithuanian National Symphony Orchestra, Kiev Philharmonic Orchestra, Sinfonica Abruzzese, Sinfonica di Lecce, Sinfonica di Bari and Solisti Aquilani. He is an established music pedagogue, having founded his own academy in Italy, and frequently travelling around the world to host lectures and masterclasses in different countries.

His latest masterclass in Malta saw him dealing with students of different ages and levels, as he worked with them to identify and correct the flaws in their technique and approach, all the while urging them to bring out the very best of their abilities with his characteristic energy and good-natured style.

"It was a very positive experience", one student said. "I feel I learnt a lot, especially about rhythm, technique, and emotions and dynamics. It was much more intense obviously than normal lessons, but very enjoyable overall".

These sentiments received unanimous approval from the rest of the students in the class, with another noting that, "he has a certain energy and without wanting when he’s guiding you it transforms that energy in your performance. He was very encouraging. I feel I took a lot from this, because we touched upon certain new things, and even his mere presence seems to transform the performance. He gave certain direction while I was performing which really helped and now hopefully, I can continue to remember this when I’m playing on my own!"

Some of the other pianists on attendance, meanwhile, were left impressed by the Italian professor's ability to identify and correct their weak spots, with one declaring that "he was very energetic, and extremely helpful. He managed to identify those elements which I needed to improve on and was very helpful with guiding me on how to do so. A very positive experience. It’s a bit nerve-racking at the beginning but you feel that he’s with you not against you so you calm down and focus on the playing. It was great and I hope I’ll have more opportunities like this because I got to perform and I got a lot of very good feedback and advice".

For his part, Mazzoccante himself was also left with a positive impression, stating that "when I have a masterclass, I always feel good, because I feel I can give something to the students, and it doesn’t matter where I am or where they’re coming from! It was very nice because they are different ages and different programme and it was very interesting to work with all of them. When you work with young people it’s always a surprise because you never know what’s going to happen, not when they start to play but half an hour later, and this is always very exciting for me".

Asked about his trademark energetic lecturing style, the Italian pianist said that it is a conscious decision on his part, as he explained that "over the last two years, maybe because of this period with the coronavirus pandemic and all that has been going on, but young people are a bit compressed I feel, but as soon as you give them the opportunity to open and to feel good, it’s just great and they can do something very special and impress and surprise even me. This is why I always bring a lot of energy to my classes, to encourage them to open up and release as well".

Mazzoccante's stay in Malta is not yet over, with the musician's main reason for travelling to Malta being the Paganini Festival, which is being organised by the EUFSC, and will see the pianist teaming up with his compatriot – the violinist Giuseppe Gibboni – to deliver a public lecture at the Italian Cultural Institute on the morning of Wednesday 16th March, before a concert that same day at the Manoel Theatre in Valletta at 8pm.

To keep yourself updated on the latest events organised by the EUFSC, please follow the official website here.