As part of its Malta Classical Music Academy, the European Foundation for Support of Culture invited the Italian flautist Tommaso Benciolini to Malta to deliver a series of masterclasses at the Malta School of Music and the University of Malta. 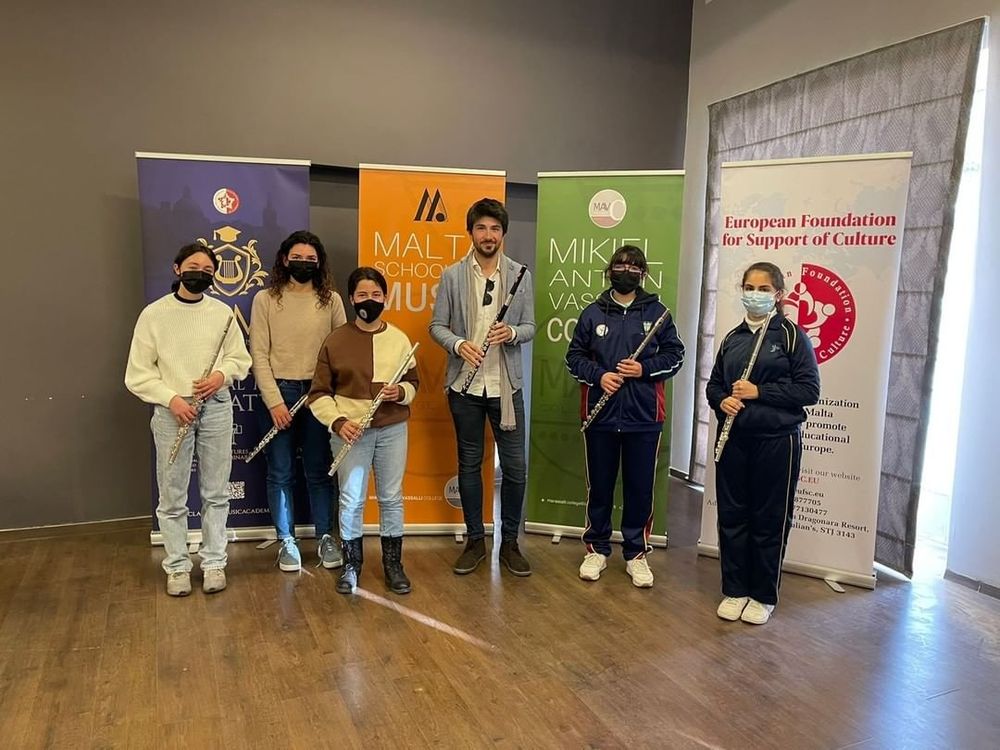 As a cultural NGO with the overarching aim of fostering the growth and increased appreciation of classical music around the world, the European Foundation for Support of Culture (EUFSC) has constantly focused on offering as many educational opportunities as possible to music students all over the globe , with the firm belief that this work shall be instrumental in helping to create the artists and audiences of tomorrow.

Here in Malta, the Foundation's long-running Malta Classical Music Academy has been at the very heart of this mission, with hundreds of students across the years being given the unique opportunity to study and learn from some of the top musical minds of our time thanks to this one-of-a-kind educational initiative, the likes of which had never been offered in Malta before.

Heading into 2022, the EUFSC decided to hit the ground running, and has consequently teamed up with a wide number of organisations to present a series of masterclasses with various celebrated international musicians and pedagogues throughout the year. The first of these, led by the distinguished Italian flautist Tommaso Benciolini, took place between the 14th and 15th of February 2022, and was organized in collaboration with the Malta School of Music and the University of Malta, with a number of classes being held on the premises of both institutions.

Prizewinner of the 2017 New York Respighi Prize, Tommaso made his debut as a featured soloist with the Chamber Orchestra of New York on the prestigious stage of Carnegie Hall in 2018. Throughout his extensive career as a soloist he has performed in such venues as the Berlin Philharmonie, Mozarteum Großer Saal (Salzburg), Novaya Opera (Moscow), Beijing University Hall, Royal Palace of Milan and Teatro La Fenice (Venice), and has appeared alongside such distinguished orchestras as the Berlin Symphony Orchestra, North Czech Philharmonic, Camerata Vienna , Ural State Symphony Orchestra and I Soloisti di Milano.

He has collaborated with world-famous artists such as Luciana Serra, Giovanni Sollima, Emmanuel Ceysson and Leonora Armellini, and, since 2012, has held the post of Professor of Flute at the Verona Conservatory "Evaristo Felice Dall'Abaco", an appointment that made him the conservatory's youngest professor. He has also been invited to give masterclasses at the International Contemporary Music Festival (Cuba), Tampere Music Academy and Suomitaly Music Festival (Finland) and at the Tartu Eller Music Academy in Estonia.

For one of his masterclasses, Benciolini led a group made up of a number of young flute students from the Malta School of Music at Mikiel Anton Vassalli College in Hamrun. Held on the premises of the school itself, the Italian professor guided each student through a number of exercises, focusing on fundamental aspects such as breathing techniques and posture designed to help the students achieve the solid foundation necessary to then master more complex procedures, while also sharing his own invaluable insights and experiences with the young musicians.

It was truly a wonderful and great opportunity for our students", said School Administrator Maria Blanco, "an opportunity to perform in front of each other, learn something new and try it out in front of each other, and he also really knows how to interact with the students – he came down to their level and addressed the needs they have right now. I'm certain that he gave them them ideas that they can use both now and even in the future as they continue growing and advancing in their musical career".

The students themselves also responded very well to Benciolini's teaching style, with one declaring that it was "an extremely interesting experience, and I learned new things that will definitely help me to play better", whilst another noted that "this wasn't my first masterclass, but it was the most interesting and beneficial one I think, because it's solved the most technical problems and he taught us techniques which are really instrumental for everything, and since he showed us everything in simple steps I feel it's easier to remember it all ".

For the second day of his stay, meanwhile, the professor led an open masterclass at the University of Malta, which was aimed at older students at a more advanced stage of musical progression. Once again, Benciolini listened to each student perform while offering his own guidance and advice in an effort to, as he himself put it "teach something small but important in the little time that we have, but in a way that they will remember when they go back home or when they are practicing on their own".

"It was a very interesting class", one of the students in attendance said, "we didn't have much time obviously but he managed to identify flaws in my technique and really helped me to understand how to best tackle them, it's extremely helpful ".

Another of his colleagues in the class echoed these sentiments, stating that "It's really great to get a different perspective and perform in front of someone new, especially a professor with the skill and experience he has. I'm very glad we had this opportunity ".

Benciolini himself also expressed praise at the organisation of the event and the level of the students, noting that "it was very nice because we had time to focus on some repertoire. I found the level absolutely good for a music university, they were doing exactly the kind of repertoire you do in your Masters, important classics repertoire. The level comparable with other students I've taught all around the world, absolutely comparable."

For more information about the masterclasses that the European Foundation for Support of Culture organises as part of the Malta Classical Music Academy, please follow the official website here.