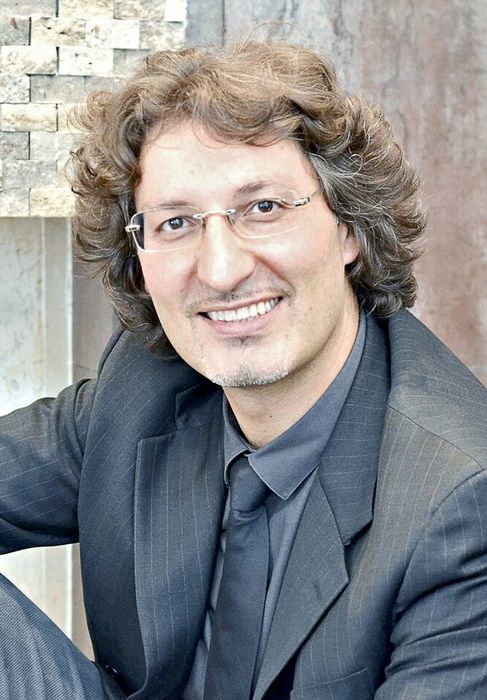 Born in Chieti, he studied under the guidance of Lucia Passaglia at the Conservatory "L. Cherubini" in Florence graduating with highest honours. He participated as a student performer on a three-year piano perfection course at the “Accademia Musicale Umbra” where he achieved a "Diploma of Excellence”.

Later, he participated in the "International Master Classes" in Klaipeda (Lithuania), held by Lazar Berman. With him, his concert repertoire deepened and improved with particular attention to the music of F. Liszt, at the European Academy of Music, Erba (CO). He perfected Chamber Music at the International School of Chamber Music in Duino under the guidance of "Trio of Trieste" achieving a "Diploma with Merit". He has won national and international competitions, including "M. Clementi" in Florence, “Agorà 80" in Rome, "F. Liszt" in Lucca, and "Città di Stresa". In 1997 he won second prize at the 'T. I. M. " - International Music Tournament; in 1998, he was awarded the prestigious "Prix Venice"; in 1999 he won second prize at the international competition "Ecomusic" of Monopoli (BA); in 2002 was the winner of the 40th International Piano Competition "Arcangelo Speranza" in Taranto. In 2009 he was awarded in the “4th International Tbilisi Piano Competition" in Georgia (WFIMC).

His musical experience has been enriched by important collaborations as a pianist in the Classical Dance, and in Opera Theatre, collaborating with teachers of Teatro alla Scala in Milan, the Royal Academy of Dance of London, Teatro dell’Opera of Paris. In addition, for several years he worked in the Teatro dell'Opera of Chieti deepening the Opera literature and working as a pianist with important international singers and theatrical directors.

He has been a regular guest of the "International Sommer-Akademie Schloss Pommersfelden" (Germany) where he has performed as a soloist and in chamber music performances and and where he teaches chamber music from 2010. He has appeared as a soloist with different such Camerata Baltica, Lithuanian National Symphony Orchestra, Kiev Philharmonic Orchestra, Sinfonica Abruzzese, Sinfonica di Lecce, Sinfonica di Bari, Solisti Aquilani.

He is often invited to be part of the jury in national and international piano competitions in Germany, Spain, Italy, Latvia, Mexico, Malta, ecc.

His conspicuous record productions range from solo repertoires, chamber music and to a soloist with an orchestra, including recordings for Wide Classique, DAD Records, Camerata Tokyo, Radio Vatican, Radio Bavaria etc. The monographic CD dedicated to J. Brahms, containing the sonates for clarinet and piano op. 120 No. 1 and no. 2 and the Trio op. 114, Published by Phoenix Classics and distributed by Ducale Music, became a finalist at the IMAIE awards 2009 and was reviewed with acclaim by specialised Italian and overseas magazines (Musica, Suonare News, Giornale della Musica, Fanfare and The Clarinet).

From 2015 he is the founder and Artistic Director of the Music and Art International Music Academy in Chieti which aims at promoting young artists and the development of the arts.

From 2017 he is the artistic director of the Concert Season of Teatro Marrucino in Chieti.

From 2019 he is the Artistic Director of "In Musica" International Music Festival and Piano Competition in Rome - Italy.