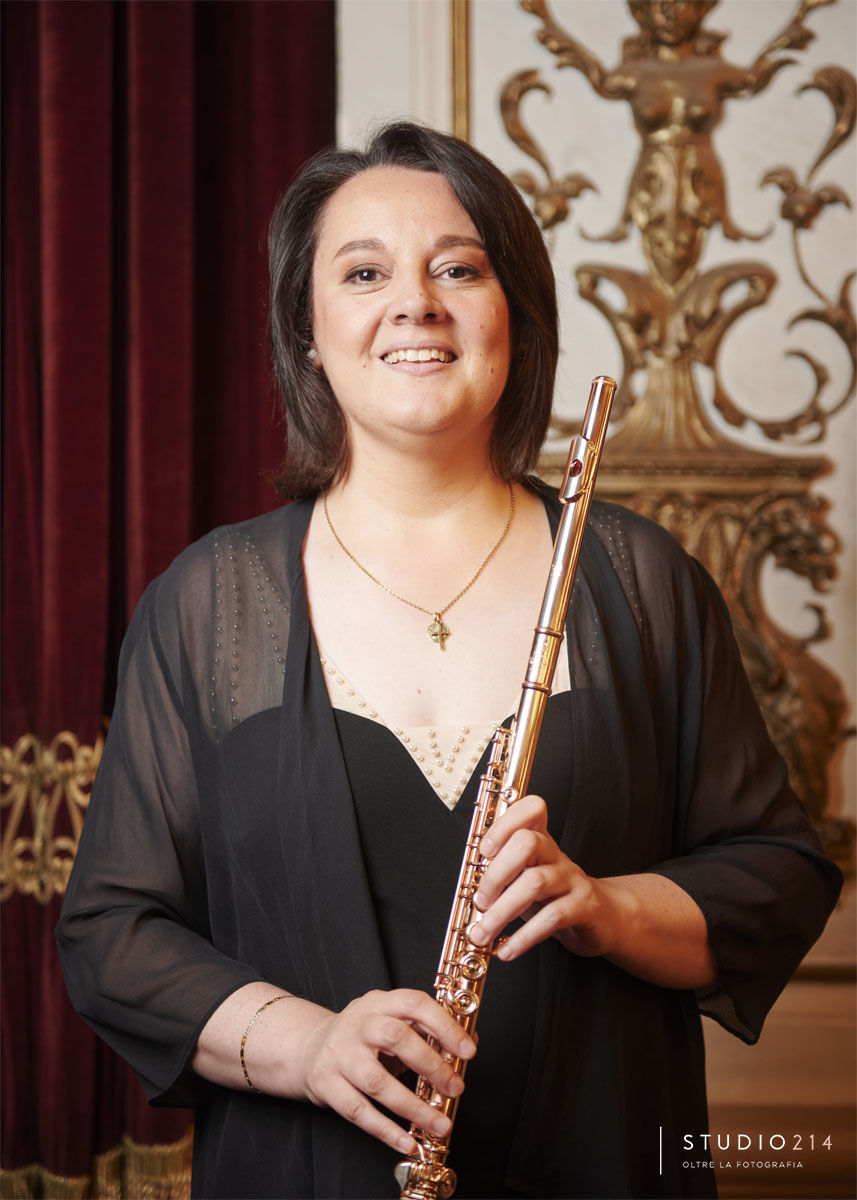 Rita D´Arcangelo,  graduated in flute, with honors, at the Conservatory of Music "L. D'Annunzio " in Pescara (Italy), she then graduated also at the "Royal Northern College of Music "in Manchester, “ the International Academy of Music in Milan " and " the Hochschule fuer Musik” in Mannheim. Rita studied with Sir James Galway for many years, following the masterclasses of the Weggis Flute Festival in Switzerland, where she won the gold Nagahara 14K flute headjoint in 2008 and was invited as Guest Artist in 2016 and 2019.

First prize in numerous international competitions, she made her debut as soloist in 2011 at the Carnegie Hall in New York. She's one of the few flautists to have in repertoire the Concierto Pastoral by J. Rodrigo.  She recorded for the German radios SR2, SWR and WDR, the Japanese National Television NHK and for the Vatican Radio. As a first flute she worked at the "HPAC Orchestra" and the Osaka Philharmonic Orchestra in Japan; Filharmonia Gorzowska, the United Chamber Orchestra and the Kammersolisten der Deutschen Oper Berlin. As a chamber musician she plays in Duo with pianist Giuliano Mazzoccante and guitarist Jakub Kościuszko.  She's flute professor at the Department of Music of the German State University BTU – Cottbus, at the private University Akademie für Musik in Berlin, and regularly teaches in masterclasses in Asia, Europe and U.S.A.

The published discography includes: Chedeville: “The Pastor Fido”, 6 sonatas for flute and continuo (Wide Classique 2010); “Allegro con Brio” (Wide Classique 2012) in duo with Giuliano Mazzoccante, winner of the Award of Excellence in the Instrumental Performance Solo category of the Global Music Awards, Los Angeles, U.S.A; “A Virtuoso Journey”, (2015 Centaur) winner of the "Gold Medal Winner - Award of Excellence" of the Global Music Awards, Los Angeles, U.S.A; “Rita D'Arcangelo - Jakub Kościuszko” (QBK - 2016); “Solo Bach” (Centaur 2017) dedicated to solo flute music by J.S.Bach and C.Ph.E.Bach with also some transcriptions made by Rita D´Arcangelo, from the repertoire for violin and cello by J.S.Bach.  “Inspired by Rita D'Arcangelo” (QBK 2019) a world premiere recording of new pieces inspired by her art; “20th century and 21st century Fantasies and Romances for flute and piano” (DaVinci Classics C00317) in duo with Giuliano Mazzoccante, a collection of the most beautiful romances and fantasies for flute and piano together with some new compositions dedicated to the two artists.

Rita D'Arcangelo is a Nagahara Flutes Artist and plays on a beautiful instrument crafted expressly for her by Kanichi Nagahara.